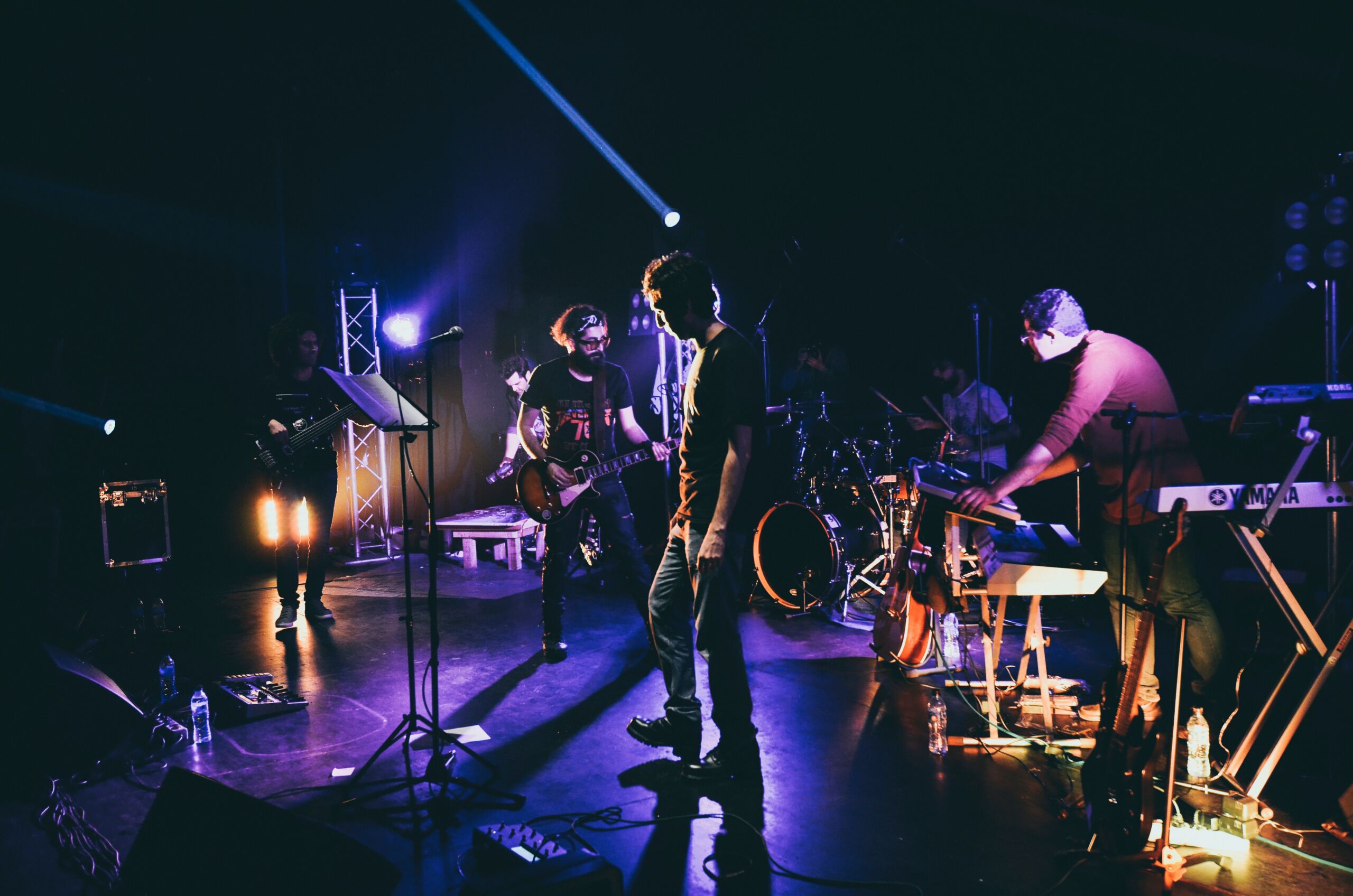 Musicians have been wearing headphones for decades, but why? Why do they wear them all the time when they’re not even using their instrument? It’s a common question that many people don’t know the answer to. In this blog post, we will discuss the reasons why musicians wear headphones and what type of headphones are best for them.

Musicians wear headphones in the studio or concert to avoid any offense during their show. At an early age, I thought this was only because musicians wanted to look cool! However, after years of research and exploration, it turns out that wearing a pair of headphones has many benefits for both professionals as well as music enthusiasts.

One reason is so they can hear themselves clearly while playing by eliminating outside noises; another one may be preventing feedback from microphones which would make things loud enough where people nearby could not enjoy them at all times since sound travels very quickly and easily within halls with large speakers such as those found inside stadiums around your typical rock concerts these days – but there are other reasons too: you don’t have to worry about offending anyone sitting near you.

Why Do Musicians Wear Headphones In The Studio?

If you’ve seen a singer in the studio wearing headphones, then it’s likely that your first thought is like mine: they’re just an accessory to look fashionable.

A lot of people don’t realize these artists are using their ears so carefully with headphone use because there can be a difference between hearing what you want on tape and not having those things picked out by someone else later down the line!

Studio headphones are indispensable for every singer who steps into the recording studio. They help singers hear a well-balanced song while singing, which prevents any vocal flaws that might ruin their performance and all of the hard work they put in to get there.

The following points will help you to understand clearly. Have a look below.

In the early days of music, bands needed to record their entire track in one go. This might sound impossible for modern musicians but thanks to recent advances in technology they can now record their parts individually and hear other versions through headphones that allow them to compare different takes of a song or solo!

2. Keeping Each Recording Clear And Free From Any Bleeding

One of the most important reasons why musicians wear headphones in a studio is to stop bleeding. Suppose, if you’re recording your part while playing music at full volume in the background then the mic might pick up another loud sound automatically. This situation is called “bleeding.” To prevent this from happening, some people like wearing headphones and listening to track through them which helps mics not catch different sounds!

3. Communicating With The Sound Engineer And The Producer

The sound engineer is one of the most important people in a band’s life. They are responsible for everything from controlling what you hear to running your levels and so on! Why not have a conversation with them?

Studio headphones help musicians isolate themselves while talking to their producer, sound engineer, or other collaborators at any time during the recording process when they need to communicate. And provide the musician with a personal soundtrack, which enables them to tune out any extraneous noise for pure concentration and creative flow.

4. To Synchronize With The Other Musicians

Every live session, there are moments when two artists go off track. To maintain the perfect momentum in a song or performance, click tracks were introduced to make an audible ‘click’ sound at predetermined times that would guide them back on course and keep everything synced up with each other.

5. Setting Their Own Focus

With so many instruments playing in a single song, it’s hard to catch every sound at once. Sometimes vocals need more attention than other sounds like keyboards and guitars. That time is when they should wear studio headphones – with the help of these gadgets, artists can set their focus on any instrument while removing distracting noises from elsewhere in the track!

Why Do Musicians Wear In-Ear Monitors At Concert?

In a live concert setting, musicians need to make sure that both their own performance and the other instruments can be heard. Previously, floor monitor speakers were used for this purpose.

Nowadays though, more modern equipment is being utilized like in-ear monitors which provide clear audio quality as well as facilities such as listening to click track sounds so everyone knows when it’s time for each instrument or vocalist to take over again during changeovers between songs.

1. Isolating One Sound From Other

In-ear monitors give musicians the opportunity to hear what they want when they want. Singers can isolate their specific track through a mix of studio headphones or in-ear monitoring while musicians often follow one particular instrument at a time for rhythm purposes.

IEMs allows musicians to adjust the volume level, so they can lower it if they want. Not only does this help protect their hearing, but sometimes vocals need a specific instrument louder than others at which point IEMs will be able to serve that purpose too.

A concert is one of the loudest places to be, but it’s a necessary evil in order for musicians to produce their art. The cheering crowds and high-volume instruments can damage ears so that they have four times more probability of losing hearing than ordinary people do! In-ear monitors come with noise cancellation properties which help block other unnecessary noises and protect your ears from future loss of hearing problems.

IEMs are revolutionizing the world of music. Musicians can now move freely around, and artists have more room to perform with their creative choreographies!

Few Drawbacks Of Wearing Headphones On The Stage

Nothing is perfect in this world and that includes IEMs. With the help of an earphone, you’ll never hear your fans again- unless they decide to stop working as every other electric gadget does.

1. Disconnection From The Audience

Musicians are encouraged to invest in sound-isolating earplugs. These small devices will block out the ambient noise of an audience, which can decrease their enjoyment of a live show and may even cause them to play louder because they feel less engaged with the crowd’s energy.

2. Wrecking A Live Performance Due To Technical Issues

In-ear monitors can be a lifesaver, but they’re not without their flaws. Sometimes when the technology malfunctions it leaves singers either off-key or unable to hear themselves as well which is frustrating for both them and anyone trying to listen in on what’s going wrong.

3. Easy To Slip From Ear

Ear monitors are not custom-made. So, if the gadget doesn’t suit you or your ears can’t grip it well enough to keep them in place they will just slip from the ear

However, now that you know some of their negative features as opposed to hearing aids which have been designed with individual needs and specifications in mind – don’t think these reasons alone make people take out their earpieces during a performance?

Why Do Singers Sometimes Take Out The Earpiece?

Musicians are always looking for ways to connect with their fans. When they take off their earpiece, it might be because of a malfunctioning sound system. But more often than not it’s so that the audience can feel like they’re singing right alongside them and get excited about what’s happening on stage!

By the time we see how different types of studio headphones work or even in-ear monitors do you think musicians could use those same ones while recording?

Do Musicians Use IEMs While Recording In The Studio?

In recent years, in-ear monitors have become much better. They offer almost the same quality as studio headphones and are often used by singers during recording sessions. In general, artists prefer to use them because they provide a higher level of comfortability than any other kind of earphone or headphone on the market today – both for those who listen live (or prerecorded) music and also when talking about voice actors.

It’s been a pleasure writing for you today. I hope that now when musicians wear headphones in the studio or concert, it makes more sense to you. In my ignorance as an adult and child alike of what goes on behind-the-scenes during concerts and recording sessions – seeing them with their heads down listening intently like they’re about to go deaf from all this noise would make me laugh aloud thinking “well okay why not just save your ears!” but knowing how important these things are has made me wonder if maybe we should be wearing some too instead?

Mink
He is an engineer with nine years of working experience in the electronics industry. He has expertise in writing on 3d printers, smartwatches, laptops, headphones, monitors, smart gadgets, gears, etc. He can be reached anytime at mink@reviewscrush.com
Latest posts by Mink (see all)

Gracemink.com is a participant in the Amazon Services LLC Associates Program, an affiliate advertising program designed to provide a means for sites to earn advertising fees by advertising and linking to Amazon.com. We may earn commission if visitor purchases from Amazon through our links. As an Amazon Associate I earn from qualifying purchases.